Vanishing Walks is a theater performance without actors. They use tablets, as prompting devices, which are also entry points to a client-server system. This system coordinates the spectatorial experience, triggering lights, video and sounds, controling the progress of the play.

The user interface of the prompting device presents the basics elements of a play script, stage directions and replica, It also provides extra information, allowing the actor to anticipate its turn, being more efficient when reading, The replica is displayed in advance and he can read the name of the previous, the current and next character who’s playing.

The actors are controling the progression of the play, triggering the next turn pressing a simple button when done. This activates the interactive story, which is not reduced to text, image, sound or light changes. There is also a form of interaction with the public. Actors are only activators than can be replaced at any time by the machine… 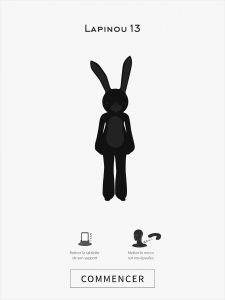 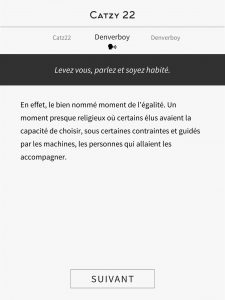 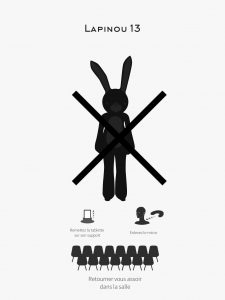 The user interface : screens from the application

Vanishing Walks describes the events that led a group of people to get rid of their body envelope in favor of a purely virtual existence.

Following their desire to transgress their human condition, they found a way to download their consciousness onto a computer, seduced by the promise of an immortal life in the form of artificial intelligence. But this new existence, far from being singular, reduces them to a form of computer life without autonomy.

Becoming executable through a program, « consciousnesses » have turned into lines of script. Deprived of humanity, converted into computer language but incapable of developing their intelligence, they constantly repeat lines of command, for such has become their function. They loop between simulations, in a huis clos directed by the machine.

The application is based on a client-server system developped with Unity 3D. The role of the client is only to display the graphical interface to the user and send the interaction events to the server (mostly a button pressed). The server contains all the data necessary for the interactive experience, particularily the XML file generated by the authoring tool, which describes the entire experience in the form of structured text. 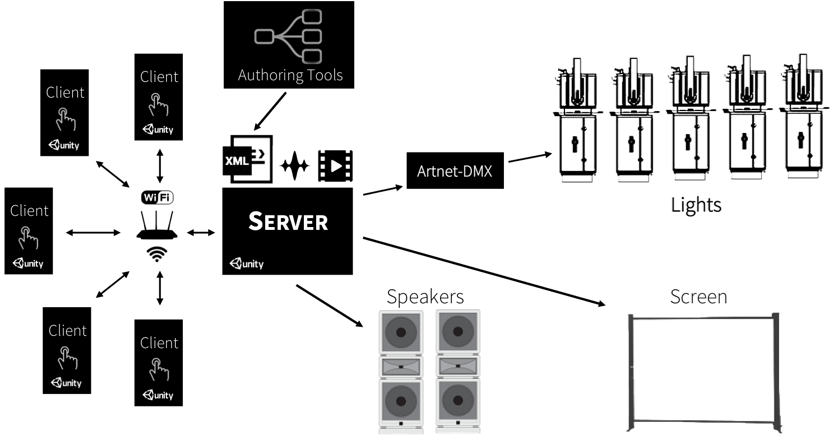 The authoring tool has also been developped with Unity 3D, using the C# classes permitting to extend its editor. It allows to represent visually the user experience as a graph, each node corresponding to a particular event (display a text on a client, trigger a sound or a video, display an image, modify the value of DMX projector, etc.).

Audio files are not directly triggered. The application integrates the middleware FMOD Studio from Firelight Technologies, which allow sound design to adapt itself smoothly to the progression of the experience (loop, random variation, transion, etc.). This is critical because the exact timing of the play is unknown. 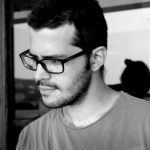 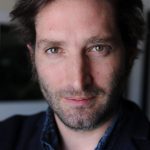 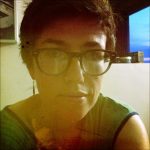 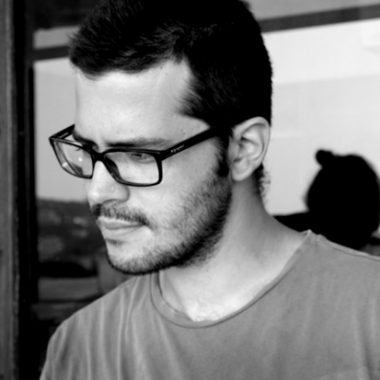 Diego Ortiz is a french-colombian artist born in Cali, Colombia on 1980. His work explore the relation between fiction and reality creating interactive devices and audiovisuals experiences using mobile technologies. He proposes contexts which subvert the place and the role of the spectator in the creation and diffusing process. he presented his work in different expositions and festivals in France and at international (Spain, Sweden). 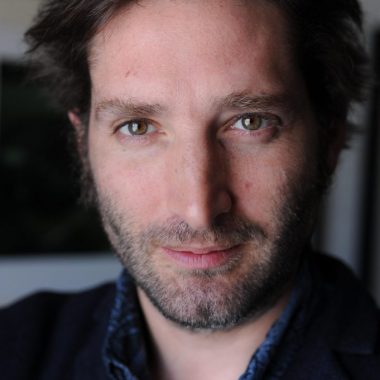 Antoine Gonot is an signal processing engineer who also has an acoustic master since 2003. He begun an informatic Ph.D in 2004 at orage Labs, which was lead by Stéphane Natkin from the CNAM. After beeing an researching engineer at the CEDRIC laboratory from the CNAM during two years, he started to be an university lecturer at Aix-Marseille university in 2010. He is in charge of the music way for cinema and audiovisual master of SATIS department. 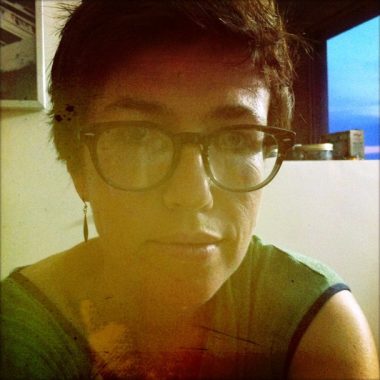 Claudine is graduate of architecture, she practices during two years, then she gets involved in scenography on 2004 aside of the stage director Gaëtan Vandeplas and the Ombilic company (theater and performance). She also worked with Royal de Luxe and François Delarozière, the Ilotopie company (street theater). Then comes a formation to discover theater machinery and experiences raise, develop especially for expositions and cabaret shows from 2004 to 2008. From 2008 to 2012, she assists Macha Makeïeff (theater and opera) for scenography et continue to develop her perosnal projects for theater, dance and contemporary arts with among others Patrice Thibault, Julie Kreschtzmar,  les gens du quai company, Balkis Moutashar, Waël Shawky. Today, she continues this practices of differents scenographies, univers are still crossing, feeding themlseves of each other. « It’s a work of creation, listening, showdown, sharing and dreams »

Creation of the tablet supports and gobos at the LFO lab, all informations here 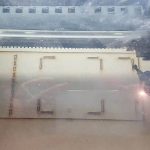 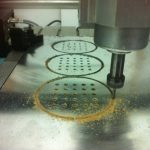 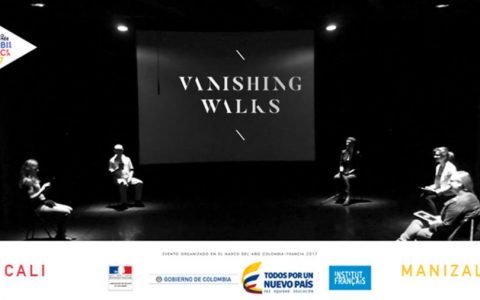 Vanishing Walks will do two shows for the international imagen festival of Manizales. This show make part of the France-Colombie 2017 year.
Read More 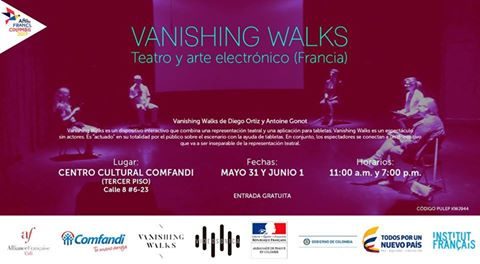 There will be two shows on May 31st at 11am et June 1st at 7pm at the Comfandi of Cali for the Colombia-France year 2017.
Read More 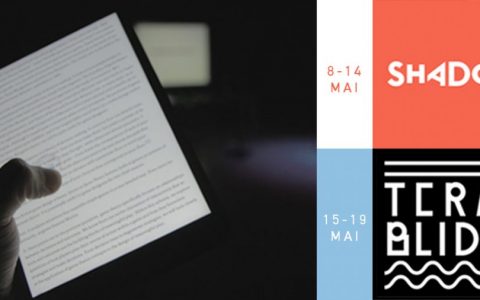 Enf of residency at TCRM-Blida